Neil and his wife, Tracey, have run Bevan Caravan and Camping Supplies since 2011 but he says repeated flooding over the past 5 years has left both the town and his business struggling, even in the Summer months. 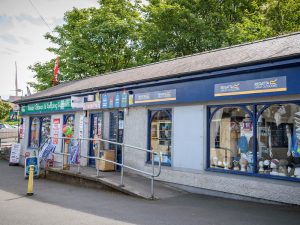 “Like most suppliers, manufacturers supply us with seasonal stock on a sale or return basis.  However, suppliers won’t send us goods unless we can insure them – and due to being flooded 3 times in 5 years, no insurer will touch us – we’ve spent every penny re-stocking, tourism has been slow and soon that stock will be ‘last season’, unable to be returned.”

In a statement, the Isle of Anglesey County Council said it empathised with the difficulties facing Bevan Camping Supplies and stressed that they were working in partnership with other stakeholders to improve the town centre.  They also confirmed that they would do their best to ensure a strong base of small retail businesses to ensure the future prosperity of the town whilst playing their part in resolving the flooding issue.

The council said they were currently working with NRW to put short term flood prevention measures in place:

“Since November 2017, the Highways service has been carrying out works to repair walls upstream of the Pont y Plas bridge, to help contain flood water within the river channel. They also plan to carry out river clearance works beneath Pont y Plas as part of this work.

“The Council has continued to urge NRW to escalate their response to the flooding and ensure that a longer term solution is put in place.”

A spokesman for NRW defended their response, saying that modelling needed to be completed before they could put long term measures in place:

“From September properties at risk of flooding will have the option to receive automated telephone messages of potential high river levels so that action to protect their property can be taken.

“Alongside this, we’re modelling the river and how the flooding happened – which is an essential step in identifying the best options for managing flood risk in the future. Once the river modelling has been completed, in around March 2019, we can look at options for developing a scheme to reduce flood risk in Llangefni.”

However, for businesses like Bevan Caravan and Camping Supplies, any long term measures could come too late.  Neil Bevan says:

“We lost over £22,000 of stock due to flood damage last year alone – early warning and throwing us a few sandbags is not a proportionate solution to the scale of the floods we faced last year.  Trade is slow now.  This will get only worse because those who do come won’t want last season’s stock and we can’t send our summer stock back any more.  Many Llangefni traders seem to have given up and are closing early – when you are closed or don’t have the stock holidaymakers want, the visitors soon dry up.

“We face an uncertain future, going into another Winter in a worse position than last year.  Many of the small businesses in our beautiful town face relocation or closure.  When the shops have all closed, there will be no reason for visitors to come back.  Llangefni’s traders need help to survive while long term flood measures are being assessed, or there won’t be a tourist trade left to save.”