Children from schools in the Llynfi Valley have been learning about the exciting Caerau mine-water scheme which will use the heat beneath their feet to warm 150 homes.

Bridgend County Borough Council has been awarded £6.5m of EU funds to develop the trailblazing project which involves using water that has filled Caerau’s old underground mine workings as a geo-thermal source of energy. 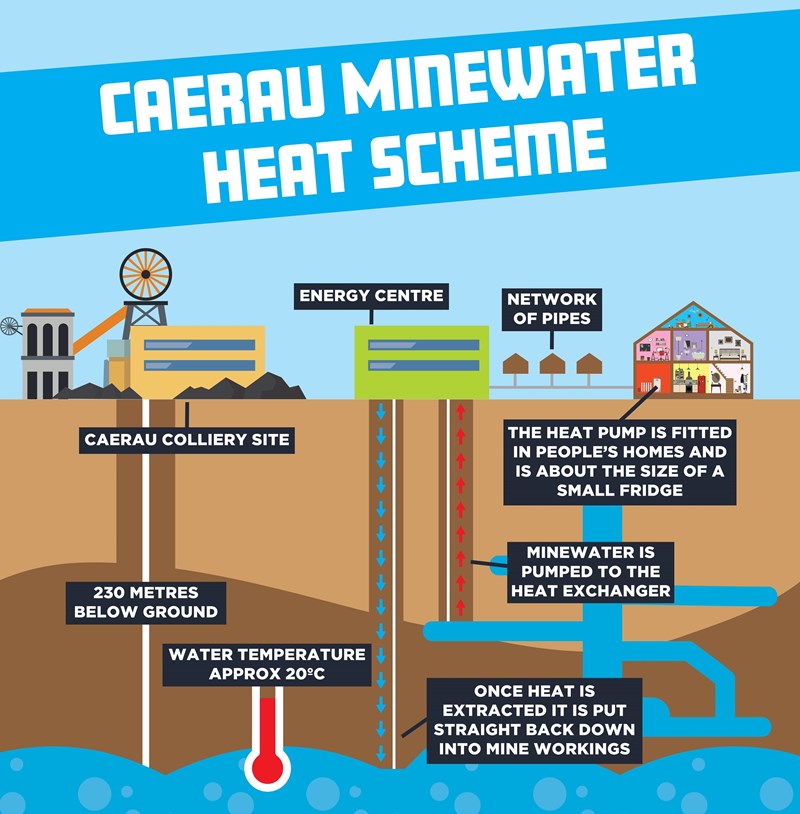 The water has been warmed naturally by the Earth’s core so has an average temperature of around 20 Degrees Celsius. The idea is to pump the water to a heat exchanger at the surface which will extract the heat out of the mine water.

This heat will then be transported through a network of pipes to people’s homes, get passed through a heat pump, and then heat homes using their existing radiator systems. The mine-water itself would not, at any point, enter people’s homes.

One hundred and fifty homes will be linked up to the scheme to begin with, with potential for hundreds more to join the network in the future.

Bridgend County Council is now holding workshops with around 200 pupils from six primary schools – Caerau, Nantyffyllon, Plasnewydd, Cwmfelin, Garth and Llangynwyd – to teach them about this pioneering scheme which is taking place on their doorstep.  A council spokesman said:

“We are keen to engage with as many local people about this fascinating project, so we thought it would be extremely interesting for school children to find out about the science, technology, engineering and mathematics behind it and learn about the importance of finding alternative sources of energy to fossil fuels.”

“Last Autumn, we were awarded £2,500 prize money from the Energy Impact Awards, run by leading fuel poverty charity National Energy Action (NEA) in partnership with British Gas, in recognition of the Caerau mine-water project’s potential to tackle fuel poverty.  We decided to spend that money on creating workbooks for the pupils to use in these workshops which they could then take home to talk about the scheme with their families too.”

“The workshops have also provided an opportunity for the children to learn more about the valley’s coalmining past.”

“One hundred years ago, there were just over 6,000 men working in the Llynfi Valley’s coal mines in Caerau, Bryn Navigation, Garth, Coegnant, Oakwood, Maesteg and St John’s, which is obviously an incredible thing for children today to try and picture.

“It’s amazing to think that having played such an important part in the valley’s history, those mine workings could now be used again to provide a safe, continuous, efficient and cost effective form of heat for the local community.”

The Caerau mine-water project will be the first ever large scale mine-water energy scheme to be created in the UK.

Currently global leaders at using this sort of technology are Holland, where the world’s first mine-water power station was opened in 2008 in the town of Heerlen – at the heart of a Dutch coal-mining area that closed its last mine in the 1970s.